The first time I took it out about a week ago I went to see the roe deer and took a monopod to help with the mass.  In honesty it seemed to make it worse as the load is so top heavy, meaning I couldn’t keep the lens still enough for even the VR to take up the slack.  The end result was I didn’t really get anything worth sharing.

The positive side of this outing was I met the ranger who was kind enough to point out the site boundary which I have never been sure of and also confirmed my suspicions on the location of the Barn owl nest in previous years.

Yesterday I went out to try and get used to the lens again, this time however I took the tripod.  A 3 Legged Thing Dave, with an older model 3LT head on it.  While this holds the lens up it’s clearly not the best solution and something sturdier and easier to use will be needed.  So if some one would like to send me a Gitzo and a Wimberly that would be smashing and save me a lot of expense!

The roe deer where a no show but that’s wildlife photography for you.  Even the birds where pretty scarce.  Clearly the indecisive weather is having an effect, I just hope that with the cows now moved on the grass will grow.  This should bring back the small mammals and so the bring the predators with them.

After a while I decided the clouds looked a bit too much like rain and it was time to head back.  I started to pack up but decided to keep the lens on the camera, but put the TCs back in the bag.  The tripod also went back on the bag.

On the way back out I saw a fox at the far end of the field, disappearing into a thicket so decided to follow it.  I managed to get the image below but it’s a hell of a crop, which goes to show the quality of both the D7000 and the lens.  Ideally I would have had the 2x converter on for this, but there was no time to get it out and fit it. 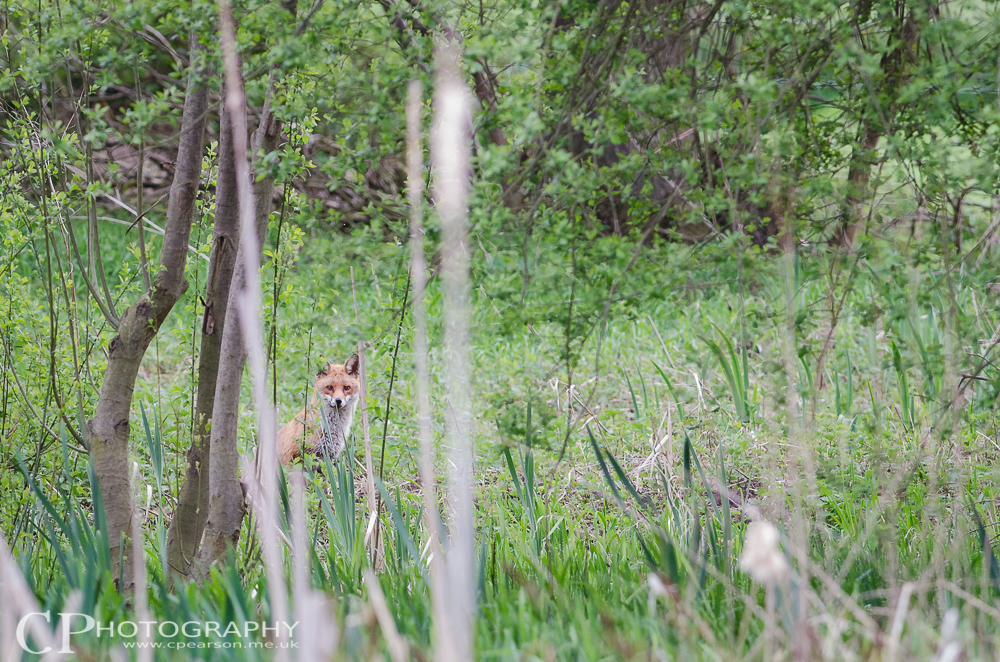 Sadly the evening was dampened by the discovery that some one had decided that right by the hide on a nature reserve was a great place for a fire, with some burnt bottles on the hide steps and a big burn mark up the side.  I’ve reported this to the rangers so hopefully they will be able to keep an eye on things.

There’s a lot more learning to be done with this new set-up   I need some more strength to help hand hold it but I also need to work out what’s a good shutter speed with and without VR and also what the teleconvertors do to the image quality and also to the look.  I also took some photos at a family wedding and this has made me think the D7000 is back-focusing so a tuning session is in order at the weekend should the time be available.