The Kirkland Signature was/is a pedal made by Josh Scott at JHS Pedals for John Mayer in 2017. It was used on his pedal board up until sometime in 20191.

Earlier this year I was looking for a new pedal/electronics project and for some reason this came to mind.

The info in Johns Instagram post is all that is known for certain. Josh isn’t spilling the beans either other than to say “The circuit is really specific and that’s something that I’ve carefully kept private.”

Allegedly 2 based on the JHS Prestige, no idea where that came from but I read it somewhere, but it sort of made sense so became the starting point.

At this point a quick google usually gives you a schematic and a few dozen examples of other peoples builds. Not this time. Just a single thread on a forum, speculating and guessing based on a terrible quality photo.

After some research I learnt that the Prestige and Mini Bomb Boost used to share a PCB, with around half the components populated on each depending on what model was being built. This lead me to a Japanese site documenting a Mini Bomb Boost needing a repair, which had some nice internal images.

Based on the speculation and tracing the circuit on the images I could tell the Prestige was similar to a Soulsonic ‘Crackle NOT Okay’. As the images were for a Bomb Boost, I couldn’t see what the actual values where but I could use the references to see if it was a resistor, capacitor, diode or transistor. In the end I went with a reasonably vanilla Crackle Not Okay, but added an extra resistor near the start to better match the Prestige. One day maybe I’ll get hold of a Prestige and document the circuit and correct values.

The enclosure design is a best effort endeavour. It looked like a 125B size and shape so thats where I started. Using photoshop I was able to measure things and get a size for the knobs and positions for the LEDs and text. This is part guess work as there’s only one image and it’s not very square on. The font for the More/More-er took a bit of hunting to get a good match. The Kirkland logo made from the biggest logo I could find. The knobs had a very specific look I wanted to maintain vs some generic alternative. Thankfully I found exactly what was needed at Thonk. The end result isn’t quite perfect but corrections would mean changes to not just the enclosure but the PCBs too. Also it’s obsessing about tiny details no one cares about. 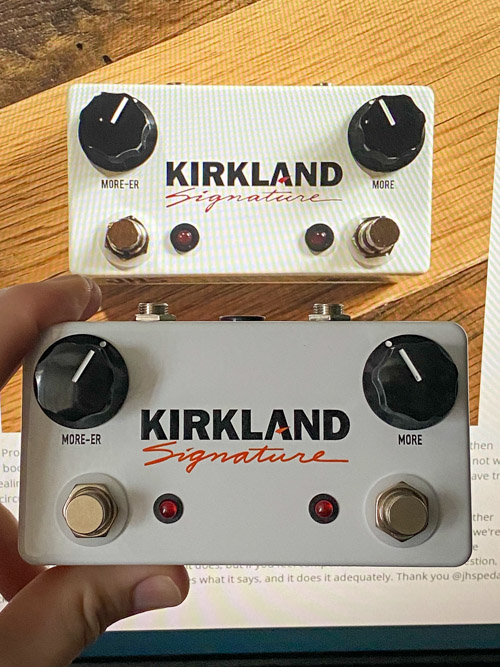 My first build was reasonably simple. 2 duplicate copies of the boost circuit and single large PCB mounting the footswitches, LEDs and points to wire in the jacks and DC socket. No batteries here. I of course messed up the first version, and had the input and output sides flipped. So v1.1 was ordered and worked as intended.

The ‘Signature’ on the enclosure was a bit more orange than expected from the colour in the design but in all I was happy. 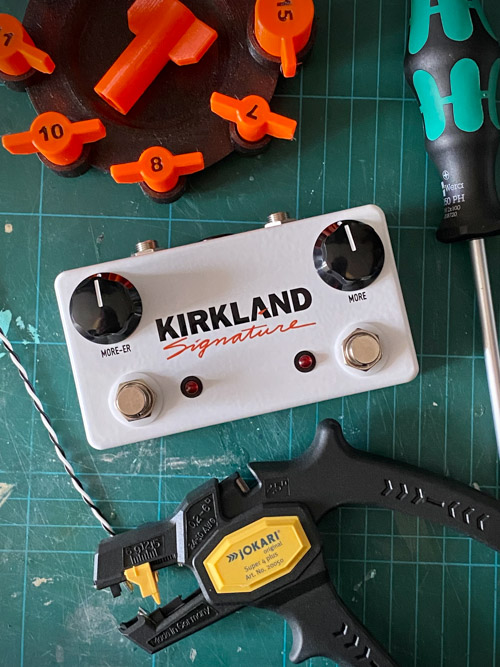 When I posted a few photos online I got a surprising amount of requests to buy one. Initially I didn’t plan to do much about this but after a while I decided I wanted to improve the design before I even considered it. 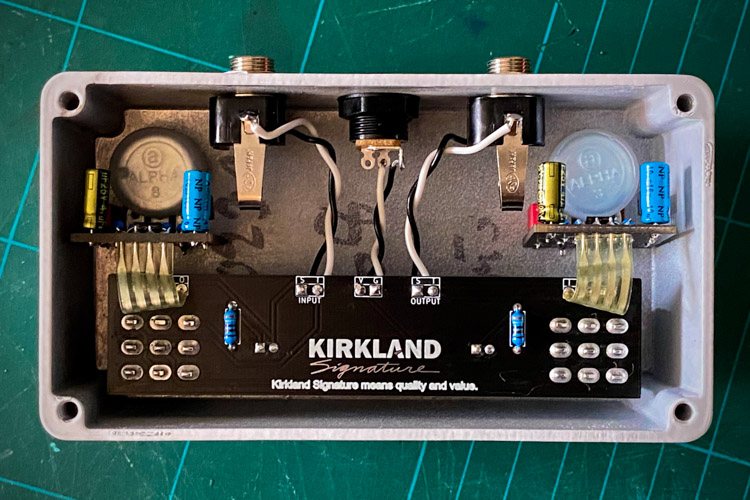 First job was to fix the enclosure. I made the red actually red. This alone made a huge difference.

The second change you wouldn’t see unless you took it apart. When adding the pots on the 1st pedal it was a pain to keep them in the correct orientation. I normally snap off the locating pin and rely on the fact there are multiple pots to hold the position. With just a single pot it was rotating more than I’d like. To fix this I added the extra hole in the enclosure for the locating pin on the pots which made assembling it much easier.

The position of the ribbon cable mount was moved outwards to align better with the child circuits. I’d not used ribbon cable before and it wasn’t very happy with the twist which made assembly tricky.

The last change was a super secret logo that shows it’s one of mine, I can’t imagine this will remain overly unique for long. 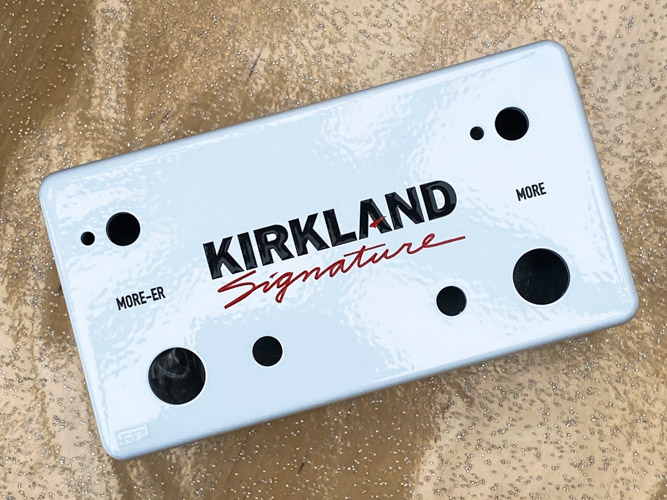 I also wanted to make the pedal not true bypass, this came from the comment in the instagram post “Does it have true bypass circuitry? I really can’t imagine that it does”.

Based on the use on the tour board, dead last, it seemed an output buffer would be a nice addition to drive the cable back to the amp. Being no expert on buffers I went with the Klon buffer. I bread boarded one up and added it after the v1 pedal which worked great, so I updated the PCB with the design. I opted for SMD for this as it kept it small and hidden under the board. There is also an added buffer bypass switch for those who aren’t a fan of such things. 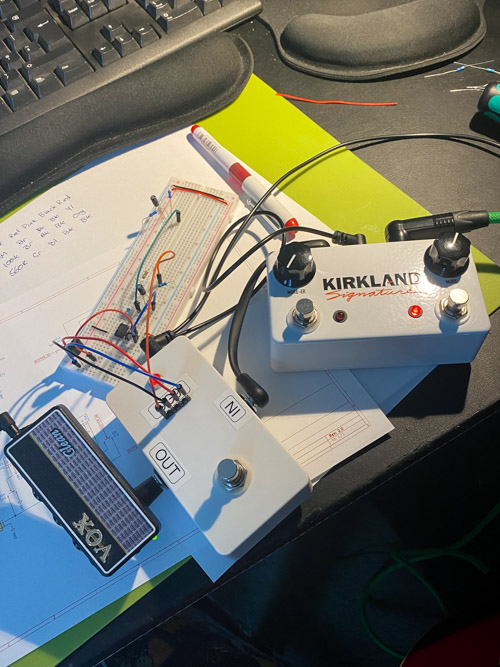 Of course, I messed this up too and had the bias section wrong. So that was fixed and new boards ordered, again.

The final step was to build 5 of them. Being able to batch build was a new experience for me. I was able to pre prep all the components sat in front of the TV which made filling the panels of boards so much easier and faster. The slowest part was preparing all the wire and jacks. It’s just a slow process to do by hand, well I used a drill to twist the wire. Each pedal has 6 wires with 2 ends that needs to be stripped, tinned and then soldered. Thats 36 operations per pedal, times 5 pedals. 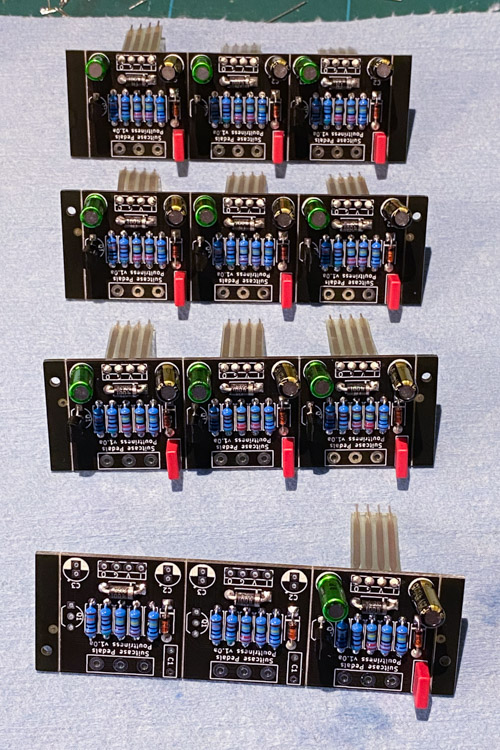 The new enclosures looked far nicer with the rich red colour, and after a suggestion from my wife I also ordered 1 in Tesco Value3 colours to keep for my self, that is serial #1. This version came out really nice and worked well with the blue knobs and LEDs. 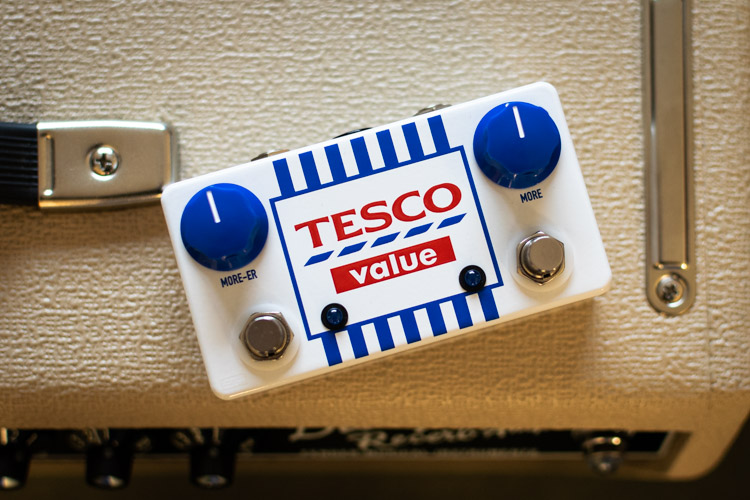 What does it sound like? It’s a boost. And then another boost. They start as a buffer with a slight boost, slowly transitions to a mild boost at 12 o’clock and then dials in lots of gain from then onwards.

At the time of writing the first pedal (#2) is now sold, and #1 Tesco is mine, leaving 3 to go. I have boards for 4 more but I can’t guarantee I’ll make them all or that I won’t order some more. What I can say is I have a new found respect for pedal companies. Building one is fun, building 5 is a task. I can’t begin to imagine what building 50, 500, 5000 is like. 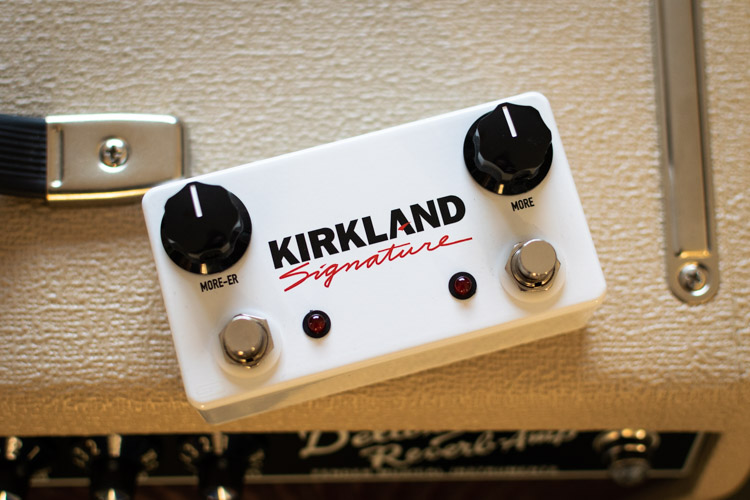