The other week we went down to visit my Dad for lunch as we often do. After lunch, we decided to pop over to Andertons Music Co for a look for something for Middlest™ to earn as a reward over the next few weeks/months.

She’s been showing interest in guitar so we picked out a few Squiers and Epiphones for her to look at. She liked a pink Squier 3/4 Strat but ultimately picked a turquoise Epiphone Les Paul SL.

I was about to put the guitar back on the rack and give her the whole speil about she could have one once she’d earned it when “I can play a D chord”….

Sure enough she did, which was rather surprising as I didn’t teach her and I wasn’t sure what was going on. Turned out she’s been using her sisters guitar and watching JustinGuitar.

I submit the following as evidence of the D chord. 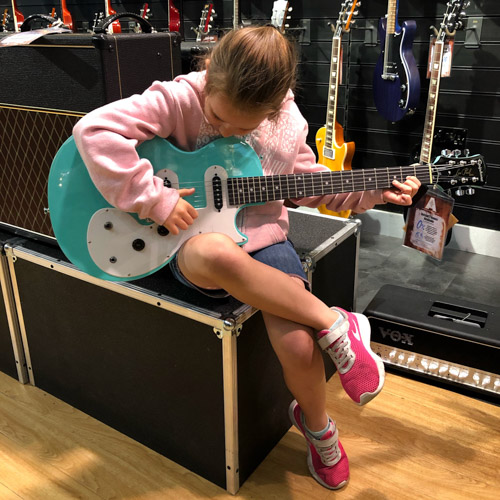 The guitar came home with us that day. The story doesn’t end there though.

Andertons run a competition called #AndertonsMadeMeDoIt, which is a post your purchases with a hashtag social media competition. So a week later I put a post up on Instagram not expecting more than a few likes just like past entries. The staff at Andertons left a lovely comment, Danish Pete liked the post and so I was happy.

Well on July 1st at about lunch-time a notification pops up saying Andertons had followed me on Instagram, that’s weird why would they do that? A few minutes later revealed why: we’d won the June draw! A nice shiny new Boss Katana 50 and a T-shirt, I chose small for the Middlest to wear.

Yesterday evening the man in brown arrived during dinner and dropped of the prizes.

Middlest was super excited and put the T-shirt straight on. They are really nice quality so I may have to try get myself one next time we are in the store. 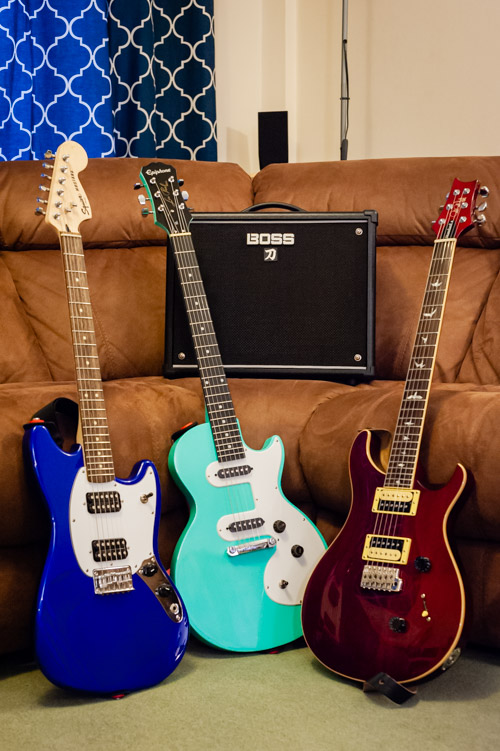 We all (Middlest, Eldest and myself) took a few turns on the amp just fiddling with the panel controls. After they were all in bed I updated the firmware on the amp1 and had a play with the Tone Studio on my laptop.

This amp is incredibly versatile, loads of sounds are in there I am sure once I figure out what all the buttons, knobs and sliders do. The headphone out is a lot nicer than the one on the Blackstar Core:id we also have.

So thank you very much to the team at Andertons, you’ve made 3 people very happy. Though next door may be somewhat less happy, it’s pretty loud.