Last week I was able to get out to visit this years rut.  Originally I planned to visit Richmond Park this year but changed my mind to stick with Bushy Park as in previous years as it’s closer and I know my way around.  Richmond will have to wait for another year when I can find a guide to go with!

I started with a visit on a Sunday afternoon in the rain.  I hoped to get some moody slow shutter images of the rut in action but the rain stopped as I arrived and it just left everything looking flat and boring.  The plus side was this trip showed I wouldn’t need the TC’s for my next visit but I’d take them anyway.

On the Wednesday of last week I got up at o’dark thirty to ensure I arrived before dawn to try make the best of the golden morning light.  Sadly I couldn’t make much of this due to the placement of the deer and the cloud cover but I did take a few nice images. 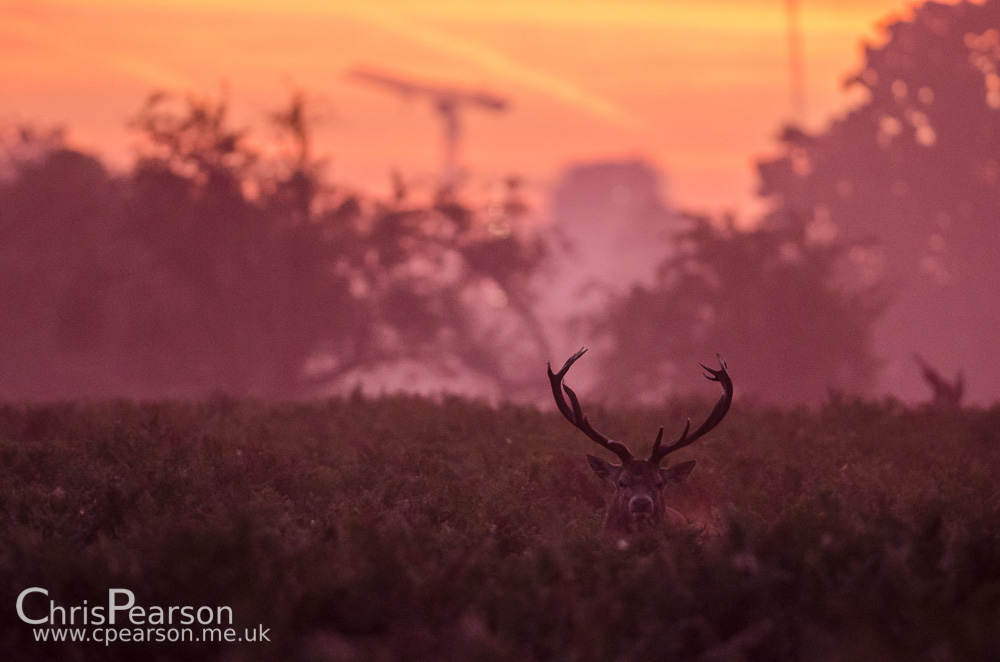 As the light got brighter, but not much due to the cloud, I made my way round the park trying to find stags not hiding too much in the long bracken.  Occasionally a small group of deer would cross the path ways as shown in this next image. 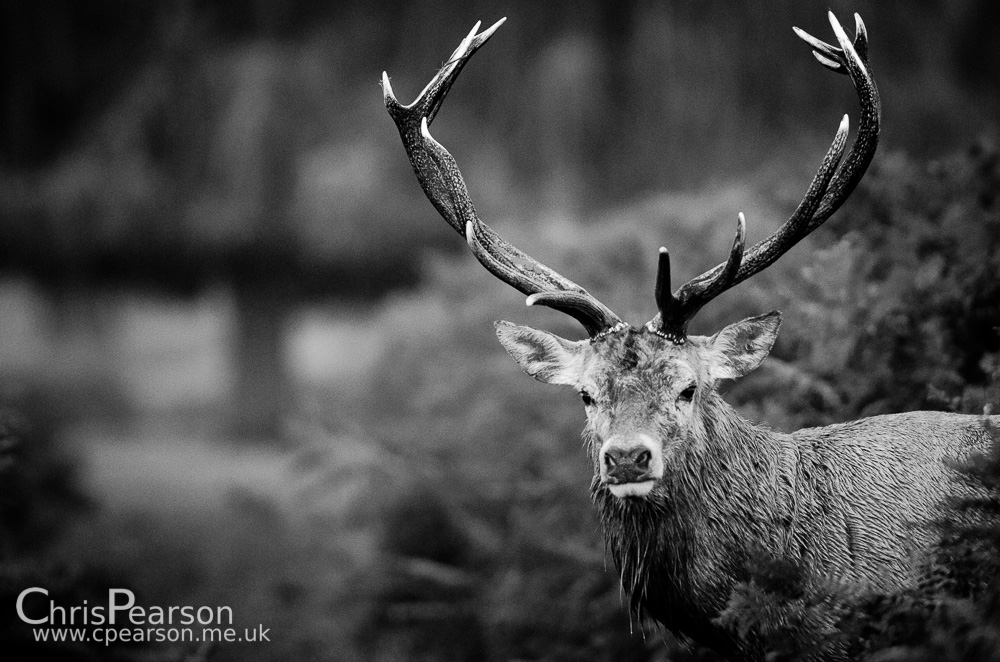 While there was a large amount of bellowing it seemed that most the deer had established their territory inside the park.  A few of the deer where “decorating” their antlers in either mud (as below) or by ripping up bracken that would almost immediately fall off!

Sadly most the deer kept in the middle of the bracken making nice images almost impossible as leaves and branches would almost always be in the shot.  Though I did manage one nice image of a deer vanishing into the under growth. 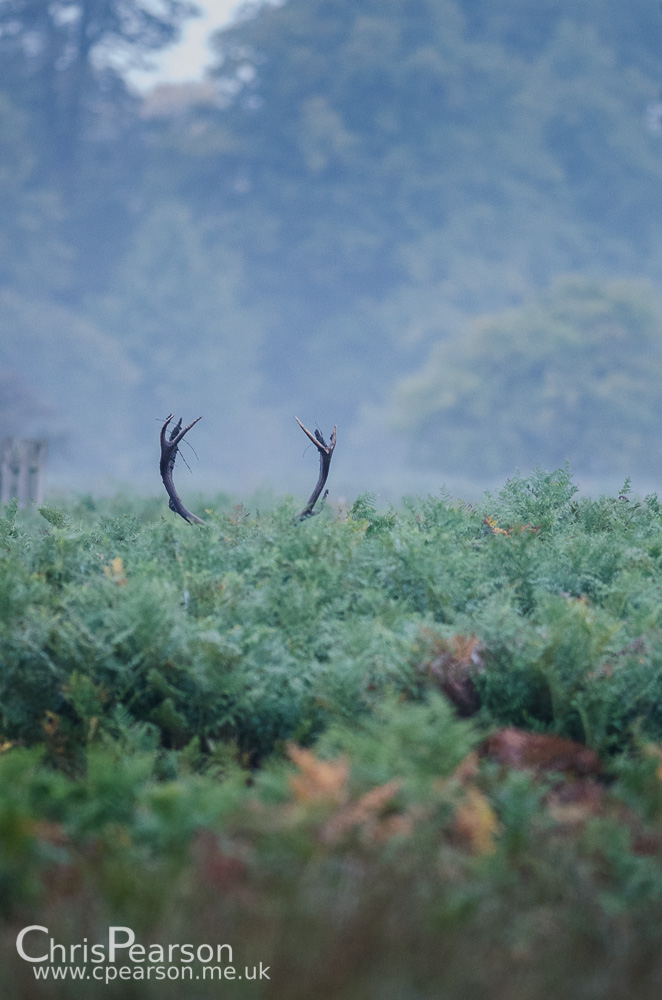 As I made my way back to the car I saw another photographer running off into an open area.  Looking at where he was going I could see what he had.  Making sure I wasn’t about to spook anything I began running to join him.  Two stags had locked antlers in a fight for that area that seemed to hold a fair few hinds.  I took a few images then decided to get a touch closer, and fit a 1.4x teleconverter.

I didn’t dare get too close as the deer where wheeling over a large area in their battle and I didn’t want to get involved!  Despite living in the park the deer are very much wild and will hurt you should you get to close as stated on a large number of signs posted as you leave enter the park or leave the car park.  However a large number of people either ignore these or think they know better and try to get too close, often with small children.

Eventually the two broke with the winner trotting off into the bracken to join the hind.  The loser however ran straight to the tree I was stood next to. I swiftly put the tree between me and the stag and backed away, waiting while he settled and moved under the tree over, all the time watching the other stag. 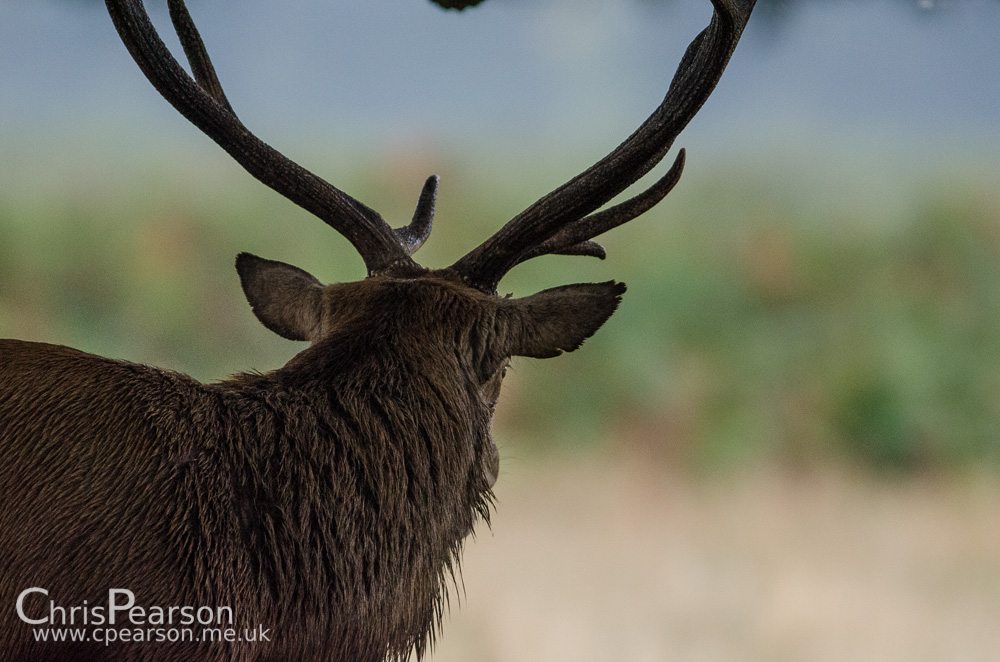 Eventually he moved off and I took this chance to make a break for it and headed to the car.

I took some video whilst at the rut, none is particularly great but I may try and edit together a short piece from what I have.  It was certainly very different to taking stills with the ISO being far lower as the shutter speed was set at 1/50th due to the 180° rule.  I think I’d like to keep trying at video but I am under no illusion that I am the next great wildlife camera man.